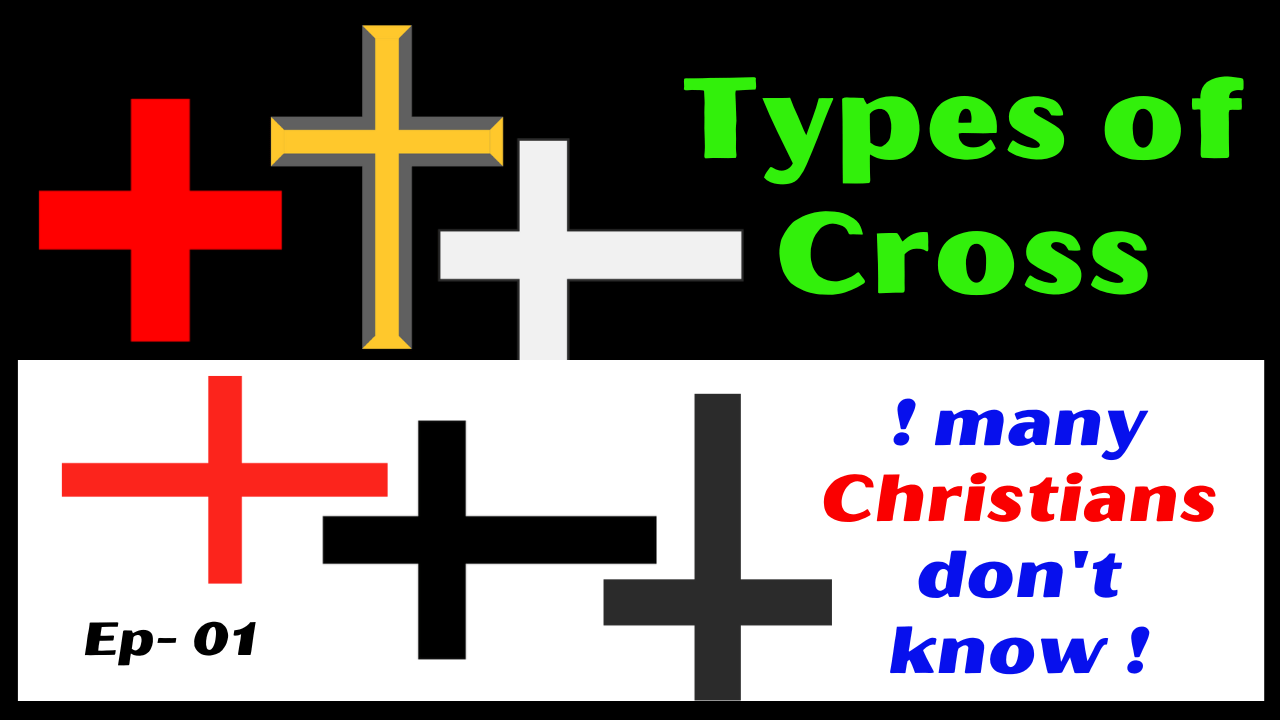 This article is about types of Christian cross symbols.

The Christian Cross symbol was once a mockery for Christians. Christianity was then considered a fool’s religion.

There was also a time when drawing crosses meant extreme torture and punishment. Historians and archeologists call this period ‘the Great Persecution.’

During Christ’s era, it was known as a symbol of the ultimate punishment: death. Thankfully, that situation changed when Constantine, the first Roman emperor, legalized Christianity.

Now, the cross is the most popular of the Christian symbols. It is the image of Jesus’ ultimate sacrifice to save humanity from sin.

Many do not know that Christians did not create the cross symbol. Egyptians, Indians, Persians, Greeks, Europeans, and Syrians have used the cross as a symbol of their faith before the birth of Christianity. Some of them used it as an ornament as well.

There have been many types of crosses since the birth of civilization. I will describe all kinds of crosses, their origin, and their uses in this series. So, why should we be waiting for?

The Latin cross is the Catholic cross symbol. This type of cross is the most recognizable of all the crosses. All Catholic churches have a sculpture of Jesus on the cross. It is an image of a saint or a picture of the cross overlooking the building. The Latin cross with Jesus, crucified on it by Pontius Pilate, would usually have the crucifix letters: INRI above Jesus’ head, which is the most common theme of Jesus on the cross.

INRI stands for Iensus Nazarenus Rex Iudaeorum. It means Jesus of Nazarene, King of the Jews. Roman rulers used this Latin phrase as a sign on Christ’s head for people to read the crime. While it used to be an accusation or statement against him, INRI has now become a symbolic proof of Christ’s divinity.

The Cross of St. Peter is also known as the Petrine Cross. It was used during the martyrdom of St. Peter the Apostle. He was initially to be crucified the same way as Jesus Christ. However, St. Peter believed he had no right to be killed like Christ. So, he requested that his cross be placed upside down. As a result, the cross of St. Peter is an upside-down Latin cross.

The Greek cross is called the Crux Immissa Quadrata, whereas four cross extensions are equal. The Greeks used this type of cross during the earlier days of Christianity. Today, the Eastern Orthodox Church commonly uses it.

The Greeks also called this cross the Tetractys. The people who admired Pythagoras of Samos, a father of philosophy and mathematics, thought that it represented earth, fire, water, and air to them.

Egyptians share a rich history with Greeks too. They used the cross as an ornament rather than a symbol of Christianity.

In heraldry, the Cross of Saint George is a red cross on a white background, which from the Late Middle Ages became associated with Saint George, the military saint, often depicted as a crusader. The Swabian League adopted the symbol in the pre-Reformation Holy Roman Empire. George became associated as the patron saint of England after the English reformation. Since then, this flag has been commonly identified as the national flag of England.

The Scandinavian cross is always far from the center. Every time it is used on a flag, the cross is always closer to where the flag will be hoisted. Origins of the Scandinavian cross could be traced back to Denmark, where it was first used. During the time of Denmark’s rising Christianity, it was also co-existing with Norse heathenism. Sweden follows shortly after Denmark, mimicking the design of the Danish flag to ally themselves with Christians.

The long Latin cross displayed sideways with its long arm pointing horizontally instead of standing symbolizes St Philip the Apostle.

Sometimes we see it as a staff with a small cross on it. The cross of St Philip is also seen in works of art depicting the Apostle by famous painter Dürer.

Though we consider it a mere variation in positioning, there are instances when the cross is deliberately displayed horizontally to represent St. Philip the Apostle.

The saint supposedly died by being crucified sideways. This cross has become part of the iconography associated with the saint Philip. He was believed to be with Jesus during the miracle of fish and loaves.